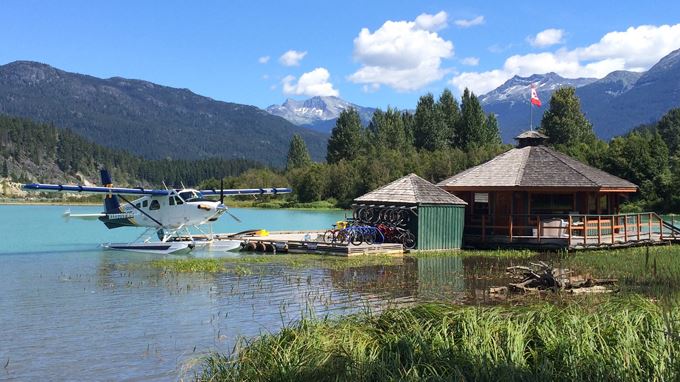 Whistler: Big Enough to Get Lost, Small Enough to Find Yourself

Who wants to fly to Whistler with me?

It’s been a busy summer, but once I’m in the air I feel like Clint Eastwood in Escape From Alcatraz. It’s a lazy summer afternoon and I’m cruising at altitude high above fuzzy green tress blanketing the North Shore Mountains. Whistler is only a hop, skip, and a seaplane jump away, and the scene from the jump over the snowy peaks has almost flown by beneath my feet already. There are forgotten ponds and lakes below that have never experienced the roar of a boat motor, and I can see the monumental Sea to Sky Highway to the west drawing a curved line between the mountains and the water. From where I’m sitting, the ends of the Earth decline so sharply that it’s hard to believe they don’t simply slip into the smooth waters of the pacific ocean.

So anyways, see ya later, civilization. I’m about to land on a green lake called … Green Lake.

I’m greeted by the smiling faces of Monica, Josephine, and Daren on Harbour Air’s Green Lake dock, and I’ll be perfectly honest here: I’m looking forward to meeting them, but I’m also eagerly anticipating a quick shuttle ride into the Whistler village, where I’ll surely get lost instantly.

It never hurts to get a little bit lost though.

“I moved here from Australia a month ago,” Monica Willemsen tells me as we sip coffee on the deck of Table Nineteen at the Nicklaus North Golf Course. “I’ve always been passionate about the aviation industry, seaplanes especially. They’re just heaps of fun – to take off from a tiny place like this and land on the water somewhere else…”

Monica’s description gets lost in her throat. It’s easy to lose the words; I know this from experience. For Monica, it’s hard to describe not only the scene at Green Lake, but the atmosphere beneath the shadow of Whistler mountain as well.

“I came to Canada for the mountains and the air. That was the first thing I noticed here in Whistler; the crisp, clean air. Whistler has something for everyone, from pubs and restaurants to outdoor life.

I realize I haven’t even left Green Lake’s dock yet, so this is Bruce’s cue to show up and shuttle me into town.

Bruce gives me the scenic route into the village. We pass openings to the Lost Lake trail, the valley trail and several groups of small cottages and vacation homes. I scribble a short note for each reminding me to return to explore further. After a few minutes I’m dropped into the middle of the village where Bruce tells me he’ll find me later whether I like it or not.

What Are You Looking For?

Whistler Air crew member Josephine Poyner echoes Monica’s thoughts about the nature (get it?) of Whistler. Originally from Toronto, Josephine left a promising career at the Pearson International Airport for her new role here.

“I love the industry and I wanted to work in the best possible corner of it,” Josephine tells me. “And up here, in the mountains, in the forest – it’s become much more than a job. Living in Whistler is a new way of life that I’ve fallen in love with.”

Whistler is a tourist town that’s proud of its ability to relax and unwind, if that’s what you’re looking for.

“Anything a person would ever want to do, they can do here,” Josephine says. “From riding your bike casually to ripping down mountain trails, from paddle boarding to simply hiking through the wilderness, it’s got everything I need.”

Josephine just smiles when I ask her if she also feels like an escapee.

I begin my adventure by aimlessly strolling to and fro beneath a scorching mid-summer sun. The village buzzes with activity, from young couples to old couples to odd couples, plus children of all ages, too. A short walk north of the village and I’m greeted with sweet silence along the banks of Fitzsimmons Creek.

An undetermined amount of time later I’m sitting on the patio at Hot Buns enjoying a scrumptious capicollo sandwich and a rich, natural coffee even though it’s 25 degrees in the shade. I can’t resist drinking coffee in every new place I visit, and this one was worth it. Inspiration started to flow and new ideas started forming, and pretty soon I was back on my feet, standing in the middle of Whistler’s famous Olympic square before finding a shady spot to read.

From the stone and beam architecture and the streams wandering beneath bridges and adjacent cobblestone walkways, this place seems to drape a mysterious shroud over one’s memory. It’s easy to forget you’re inside the heart of the Canadian west coast, and not an ancient European village. It’s also an easy place to lose yourself, both figuratively and literally.

But don’t worry, you’ll find yourself again. Or a friendly shuttle driver named Bruce will pick you up.

Either way the search is well worth the trip.

Looking for a snack in Whistler? Here’s some of my favourites: