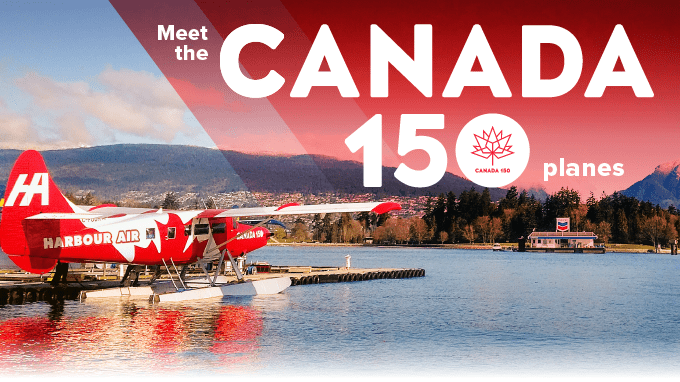 It’s no secret that Canada turns 150 this year, we’re all pretty proud about that! And here at Harbour Air, we couldn’t think of a better way to celebrate our nation’s milestone birthday than by honouring the iconic aircraft that first opened our vast and beautiful country – planes that still connect hundreds of thousands of Canadians each year!

“The Otter and Beaver are iconic in aviation and Canadian history,” said Greg McDougall, the CEO of Harbour Air, North America’s largest seaplane airline. “These aircraft were designed and manufactured right here in Canada.”

The first de Havilland Beaver rolled off of the company’s Toronto production line on Aug. 16, 1947; The Otter flew its first flight in 1952. The planes quickly gained popularity because of their short takeoff and landing capabilities. By adding floats, skis, or wheels, these reliable planes could go pretty much anywhere, flying dreamers north to find gold, bringing northerners south and used by the RCMP to fly remote patrols. The Otter and the Beaver were instrumental in accessing remote parts of our country that otherwise would take days or even weeks to reach.

“We still fly these aircraft today at Harbour Air, a testament to their reliability and Canada’s excellence in aviation,” added McDougall, a former bush pilot himself. “We thought it was only fitting to mark Canada’s 150th by honouring the Otter and Beaver, the two aircraft that opened up and united this vast country — and helped Harbour Air build an airline.”

Be on the lookout for these bright, patriotic aircraft in the skies over coastal BC this spring and beyond and stay tuned for exciting contests and promotions as we draw closer to Canada Day celebrations this summer!

From all of us at Harbour Air Seaplanes, happy 150th Canada!
Book a Flight  Flight Status  My Account
Login incorrect
Hello, Person
HAS #: 123456
My Reservations Sign Out
Hide