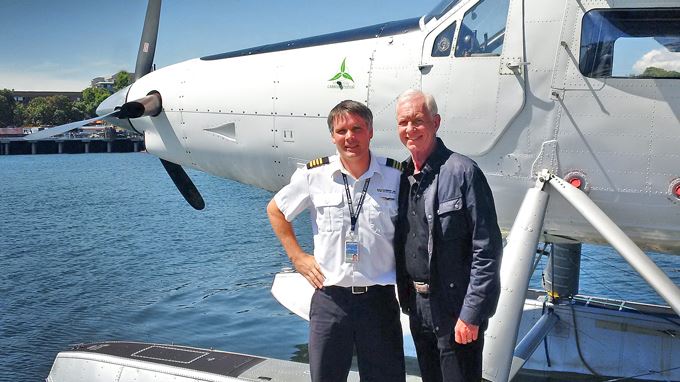 It’s a busy day for Gavin Hassett as I catch up to him in between trips to and from the harbour in Victoria. Life is steady and smooth for Gavin, but in his words, you never know who you’ll end up with on your next flight.

In 2009, a pilot, Chesley “Sully” Sullenberger, was forced to land US Airways Flight 1549 in the Hudson River immediately following takeoff due to a double engine failure. The incident sparked an intense investigation, and on September 9th, a movie directed by Clint Eastwood and starring Tom Hanks was released in theatres.

But what’s the real Sully Sullenberger like? Gavin Hasset knows the answer.

Kelvin: If you were a passenger on a plane instead of the pilot and a stranger sat down and asked what you did for a living, how would you explain the path you took too get to this point?

Gavin: The first thing I’d say is that I’m a pilot with Harbour Air. Aviation is a lifelong passion of mine, I’ve always wanted to pursue it as a career. At the earliest age I could I got my license. I could legally fly an airplane before I could operate a car.

I bet your friends enjoyed that. Less traffic.

For sure. I started at quite a young age and pursued it along the way. My aviation career was sidelined for a decade or so while I pursued sports and university. When I came back in my thirties I had picked up my float endorsement and flying float planes turned into a real passion of mine, and it’s still going strong.

You had a special passenger awhile back, have you seen Sully’s movie yet?

I have actually. I saw him this summer and he mentioned it would be coming out in September so my wife and I went to see it.

Let’s talk a little bit about your relationship with Sully Sullenberger. What was your interaction like with him?

The first time I met him we were flying from Vancouver harbour to Victoria and one of the CSA’s mentioned someone wanted to ride up in the front and they mentioned the name to me and I lit up right away. So absolutely he rode up on the front. It was great and that’s where it started. The story of his incident on the Hudson River is one I’m well aware of. As a pilot you follow these things along the way.

I didn’t know what word to choose to describe it, but you used incident. It was obviously pretty serious, but part of me is surprised there was a movie made out of it.

It was just unprecedented. They had a double engine failure at low attitude on a commercial jet, an Airbus 319 or 320. It was especially serious considering it was on a departure in one of the most densely populated areas on the planet, in New York. They had about 3 minutes to deal with it. They were going to land no matter what, it was just a matter of where. The most suitable spot he could find was the Hudson River. It’s the first time a commercial airliner of that size landed on the water with zero fatalities.

Can you relate to his thought process in that three minutes?

I can, but nothing as critical as that. As a pilot you have to make timely decisions but I’ve never dealt with anything like that. No movies for me thankfully. They really had 30 seconds to decide on their course of action and then follow through on that. Watching the movie, I had an elevated heart rate for most of it. You can imagine yourself in a position like that and how you’d have to handle it. That’s one thing I thought the movie did really well. For the crisis they faced and how they had to manage it and overcome it – when an emergency starts to take place your mind flips to the task at hand and you’re just doing the job. Your training takes over. You focus, even if you have to improvise, to ensure the best possible outcome is achieved despite unforeseen variables.

In their case you couldn’t have done anything different.

Is the movie a fair representation of Captain Sully and his decision? Is it accurate about the decision making process of the men and women of the aviation industry?

It gives you a look into how critical we are of ourselves. We’re always evaluating our processes, both when a crisis such as this hits as well as in our day to day process. Maintaining safety, integrity. and improving on safety measures, the investigation of the incident in the movie explains why they did what they did. There were certainly a lot of questions afterwards, both from the media and internally.

What can you tell people about the real Sully Sullenberger.

He’s very humble, understated, and he’s very calm. I’d say he’s rather private as well. He’s an extreme professional and he’s exceptionally qualified, but he’s definitely not a fame seeker. He’s been thrust into the limelight and I suppose if there was ever a reason to be famous then hopefully it’s for some good you’ve done. He’s very interesting to chat with if you have time.

Tom Hanks would be an ok actor to be represented by in the movies I guess. Who do you think they’ll get for the Gavin Hassett movie?

(Laughs) Well I suppose they’d better start with a body double, Arnold Schwarzenegger would be a good place to start. Leslie Nielsen is pretty funny, but Tom Hanks was a good choice, he’s earnest and calm, approachable and professional. He did a great job in this movie.

For me I’m not sure, what’s his name…oh, Harrison Ford. That would be a good one.

Alright, I’m sure his people will contact him. Thanks so much for your time, Gavin!

Thanks a lot Kelvin, I look forward to reading the article when it’s posted.