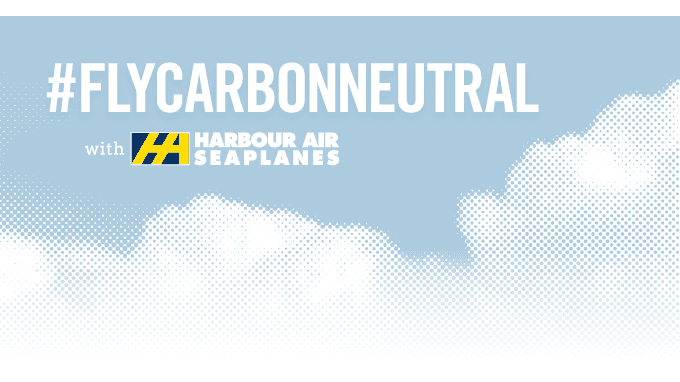 Airline’s 2014 offsets are equivalent to taking 2,321 cars off the road

Harbour Air Seaplanes carried more than 350,000 passengers on its routes in 2014, with the airline offsetting 100 percent of their emissions associated with seaplane fuel use and corporate operations. Combined, this resulted in the airline offsetting over 10,000 tCO2e, which is an equivalent to taking approximately 2,300 cars off the road. Of this footprint, 94 percent comes from seaplane fuel use. For example, flying from Vancouver to Victoria – Harbour Air Seaplanes’ busiest route – each passenger emits approximately 8 kg of CO2e per passenger per flight.

“Over the past ten years Offsetters Climate Solutions has worked with Harbour Air Seaplanes to find ways to develop, improve, and implement carbon management and carbon offsetting programs. This relationship has allowed both companies to showcase to consumers how a small investment can result in huge dividends for the environment,” says James Tansey, CEO of NatureBank Asset Management. “The investment made by Harbour Air Seaplanes has allowed them to improve their efficiency, while supporting carbon offset projects in our province and around the world.”

While the 2014 results alone are substantial, when viewed as a combined total over the past eight years, Harbour Air Seaplanes stands as a leader in business and sustainability in British Columbia, developing and enhancing their #FlyCarbonNeutral program. Since 2007, the airline has offset over 73,000 tonnes and has flown over 2.8 million passengers. Harbour Air Seaplanes’ have seen emissions, per revenue dollar, decrease by 15 per cent over the past two years.

“Harbour Air is proud to be North America’s first carbon neutral airline offsetting all GHG emissions from flight and corporate operations since 2007, with the help of Offsetters,” says Meredith Moll, Vice President of Sales and Marketing at Harbour Air. “We thank our passengers and our staff for their commitment to our carbon neutral program, which has been an important part of Harbour Air’s commitment to environmental sustainability.”

Harbour Air’s offsets have contributed to the protection of the Great Bear Rainforest and HaidaGwaii through the Great Bear Forest Carbon Project. This project covers over 7 million hectares and is an Improved Forest Management project along the North and Central-Mid Coast of British Columbia. The airline has also invested in Offsetters Climate Solutions’ Ugandan Wood Cookstoves program, which replaces conventional cookstoves with a more efficient stove. Over the past two years, offsets from Harbour Air passengers have subsidized over 7,000cookstoves.

About Offsetters Climate Solutions, a division of NatureBank Asset Management

Offsetters Climate Solutions, a division of NatureBank Asset Management, is Canada’s largest and most diversified carbon management solutions provider. Its team of industry leaders specializes in a comprehensive offering of sustainability consultancy services to help organizations understand, reduce, and offset their climate impact.

Harbour Air was founded in BC in 1982 and today has more than 50 aircrafts, servicing 400,000 passengers throughout coastal British Columbia. The Harbour Air Group, consisting of Harbour Air Seaplanes, Whistler Air, Saltspring Air Tantalus Air and Aeroflite International Services is one of the largest seaplane company in the world. For more information, please visit harbourair.com.

For Offsetters Climate Solutions, a division of NatureBank Asset Management: